The major differences distinguishing the global economic/market environment surrounding the 2003 dollar sell-off from that of 2002 were (1) the breadth of the commodity rally; (2) increased geopolitical uncertainty weighing on the U.S. dollar and U.S. assets after the outbreak of the Iraq war; and (3) deteriorating budget deficit and current account deficit balances. Prolonged interest rate cuts by the Federal Reserve to a 45-year low of 1 percent also accelerated the dollar decline and boosted commodities as the Fed vowed to inject the liquidity to allay the risk of deflation. This readiness to debase the currency via aggressive rate cuts and injection of liquidity was likened to dropping money from helicopters, a metaphor that would earn its author, former Fed Board governor Ben Bernanke, the moniker “Helicopter Ben.” The Fed’s so-called reflationary monetary policy—boosting liquidity to lift inflation above zero—was a significant negative for the U.S. dollar and a windfall for commodities as investors fled the low-yielding currency for the high-growth commodities as these appreciated against their principal invoicing currency. [ad code = 3]

The September 2003 G7 meeting in Dubai proved a highly eventful development for currency markets, when the seven most powerful economies urged China and Japan to refrain from intervening by maintaining their competitive currencies. The reaction to the unusual request was a rapid decline in USD/JPY, which is explored later in this section under JPY.

The three major commodity currencies—AUD, CAD, and NZD—were the top three performers on a cumulative return basis in 2003, returning their biggest gains versus the dollar at 34 percent, 18 percent, and 25 percent, respectively, hitting their highest levels against the greenback in a decade. (See Charts; their positioning in pairs)The rally in metals, foodstuffs, and agricultural raw materials was a boon for the three currencies, with the trend especially enforced by the deepening bear cycle in the dollar. 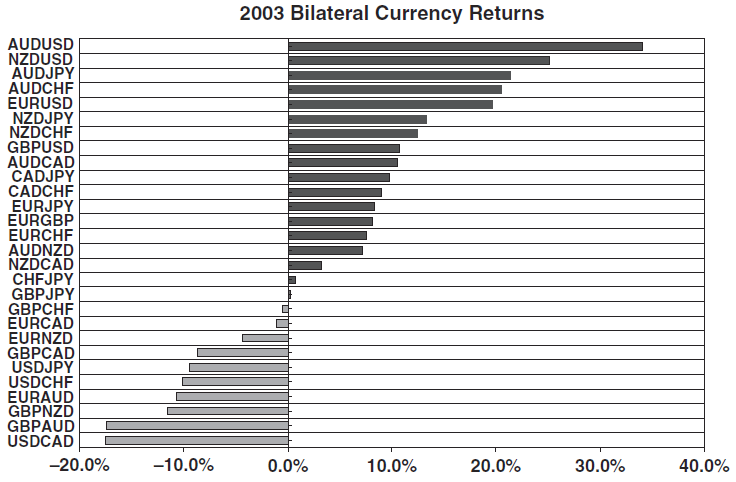